A Lesson In Plant Identification

I know I teased everyone last week with the promise of fiddleheads, but alas, I do not have any bounty to share. The sprouts we found at Onteora Lake last week turned out to be the sprouts of Christmas Fern, an inedible variety. We searched for other fiddleheads, but it seems that is the most common variety there. Ostrich Ferns produce the fiddleheads we see in the supermarket around this time of year. They are green, tightly coiled and have the remains of a brown paper sheath on them. The ones we found had many papery scales on them which caused me to do a little research before attempting to prepare them. I recommend using image searching first. I searched for fiddleheads and fern and looked through the image results until I found one that matched our samples. The name Christmas Fern was attached to the picture. I then used this excellent web site: Plants For a Future, recommended by Marti, to look it up. I have mentioned before, and stress again after this example, to always research your findings. I will continue to look for Ostrich Ferns this week. Now on with the foraging! 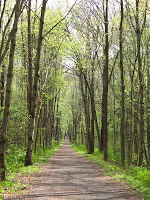 This week Amy, Alec and I attacked the O&W Rail Trail in Hurley, NY. We started at the end of the paved section on Route 209 in Hurley, NY, which continues at that point as a gravel trail south to High Falls, NY. The section we covered went through a swampy area, and dense forest. We made a mental note to bring insect repellent next time as we were constantly inundated with small insects, and Amy even had the misfortune of having a Dog Tick try to masquerade as belly button jewelry! Always perform a thorough check for ticks after foraging. This one was harmless, but many are not. Here are some of the things we found on our walk. 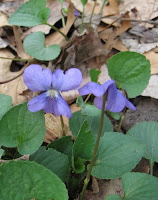 Wood Violets, the most common type here in the Hudson Valley, are one of my favorite wildflowers. I was pleasantly surprised years ago to learn they were edible. The young leaves can be used both raw and cooked. Raw in salads, usually with other greens for more flavor since they are a bit bland, and cooked like spinach, also with something added to make them a bit more interesting. I use tops from the various wild onions that grow nearby for a bit of zip, and leaves from Garlic Mustard are a great combination too. Wash the leaves thoroughly and place in a pot with a couple tablespoons of olive oil. Cover and cook over medium-low heat, tossing and stirring until wilted. Great with a bit of vinegar. The flowers themselves are edible too. I love adding the flower heads to salads for color, along with Redbud Blossoms, Dandelion Heads (remove the green parts), and Mustard Flower Buds. You can also dip them in some diluted egg whites, coat with sugar, and let dry for Candied Violets. Makes a great garnish for a fancy dessert. Canada Violets, also quite common have the same uses. Finding both, would give you some nice color contrast, as they are usually white. 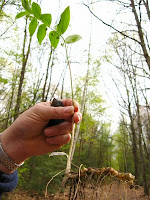 Solomon's Seal, is a common member of the Lily family. The young shoots, before the leaves unfurl can be cooked like asparagus. The root, which lays just under the soil horizontally, is where the plant gets its name. Each year a new section of the rhizome grows and sends up a shoot. The old sections remain intact, but marked with a scar, or seal from the previous years growth. It was said that the scar resembled the seal of Solomon. Don't confuse with False Solomon's Seal though, which differs by producing flowers and later fruit at the end of the stem, whereas Solomon's Seal produces multiple flowers along them stem as pictured here. To harvest, clean the dry leaves and debris from around the stem. Give a light tug on the plant to see which way the root points in the ground. Scoop your hand or a small digging tool under the section where the root should be, and lift out with the plant attached. They are not very deep and come out easy, but if you simply tug on the stem, it will break at the seal. The shoots can be just pulled without the root. These rhizomes, or tubers are edible, but only after boiling in at least three changes of water, maybe more, for a total cooking time of at least 20 minutes. If they still taste bitter, you'll know they need more. Let me define quickly what I mean by changes of water. Boil two pots of water, and add the food to be cooked to one of them. Keep the other hot. After boiling for a few minutes, drain and add boiling water from the second pot. Reboil more water for another change. Never add cold water to the food to be treated as this will set whatever you are trying to remove permanently.

Along the way we noticed signs of food to come in the next several weeks. Strawberry Blossoms mark the spot where we can return for one of our favorite wild fruits. Redbud Trees may provide attractive flowers for salad now, but later in the season they produce a great substitute for Snow Peas. Canes from Wild Black Raspberries are also very common and will be sporting the telltale white blossoms soon.

As always, please forage in a clean environment, well away from traffic, and other sources of pollution. Always research thoroughly before consuming, and don't over pick. See you on the trail!
Posted by Neil at 5:57 PM