Early April in the Hudson Valley 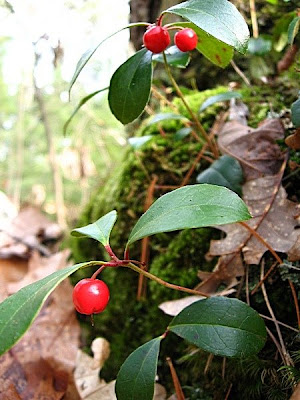 I don't know how old I was when I started having a fascination for wild foods, but I can point to a few family activities that caused it. As far back as I remember we used to go pick apples every year at an orchard near Stone Ridge, New York. Always fun, except of course for the inevitable case of poison ivy that followed a few days later. The apples weren't wild, but still the idea of picking something from a tree, and eating it right there got to me.

Another major influence were the wild strawberries and blueberries we picked as kids. The strawberries grew near our home in Woodstock. There were several places where you could pick a dozen or two small wild strawberries quickly with little effort, but a short bike ride away was a meadow that my older brothers Lee and Paul called Sergeant's Field. You could pick a few quarts of the local delicacy there.

The blueberries came from Ice Caves Mountain, near Ellenville in the Shawangunk Mountains. Ice Caves used to be a privately-owned mountain top tourist-trap, but has since become a forest preserve, similar to other Shawangunk Mountain preserves Mohonk, and Minnewaska. Huge blueberry bushes were there. Or, at least they seemed that way to a little kid. Even though I picked the berries with the rest of the family, I never really developed a love for them. I will eat them in muffins and pancakes, but rarely just plain. Still, I was amazed that something that everyone craved came from the wild, and not a store.

It was then that I started to notice the foliage around our house. We had both woods, and a lawn, and something in-between. Wild blueberries, black raspberries, rose hips, beech nuts, wintergreen, wild carrot, spearmint, chives, milkweed, these were some of the plants that I learned to recognize with some help from my mother.

When I was 16 I think, I was away at scout camp one summer and decided to take a wilderness survival course. We learned many of the plants that I already recognized and a few more. solomon's seal, arrowhead, and groundnut to name a few. We lived for two days on wild plants, hand-caught trout, and frogs legs. From that point on, any time I saw a wild plant I didn't recognize, I had to know what it was, and what it was used for, if anything. Even the inedible ones fascinate me sometimes.

So, let's get seasonal! First though, a disclaimer: I don't recommend eating anything without checking a good field-guide, or other reliable resource. A good book for beginners is Peterson's Guide to Edible Wild Plants. Also, the Euell Gibbons books are a good read, but a little dated. Be smart! Start with the easiest to identify. With mushrooms for example, the easiest to start with are varieties that can almost never be mistaken for anything else, like puffballs, chicken mushrooms, or morels. Read about dangerous plants in the guide, and learn to recognize them. Also, plants that grow near toxins, tend to absorb them. Try to pick well away from busy roads, and other areas where the hustle and bustle of our day to day lives has had a negative effect on the soil, groundwater, and air.

Amy, Alec, and I took a short trip up to Onteora Lake in early April. I was armed with some ziplock bags, Amy with her camera, and Alec with his sense of humor. After detouring the badly flooded trail leading from the parking lot, and dealing with the loudest chorus of spring peepers we had ever heard, we hit the main trail in search of nature's prizes.

Almost any time of year in the woods of the Hudson Valley, you can find wintergreen growing on the forest floor. You may also know it as teaberry, checkerberry, or boxberry. The picture above is just one cluster of hundreds we found under last season's fallen leaves. The red berries are edible, and carry a distinct wintergreen flavor. The leaves can be dried and brewed for tea, or chewed for flavor and the remnants discarded. This plant is named for the presence of the classic wintergreen flavor and scent, caused by the presence of methyl salicylate. Commercial wintergreen flavor is synthesized now, but is chemically equivalent to the natural source. This tiny plant could never produce enough for practical use, but is interesting to the casual forager.

The berries can be used in salads, or with lamb dishes. They add color and flavor to any dish, but are a bit dry when eaten plain. The leaves should be dried before using for tea. 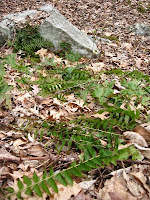 There wasn't anything else that day for harvesting, but I took note of something for a future trip: Last season's flattened fern fronds. After the snow is gone, these are markers for where the fiddleheads will sprout forth, just waiting to be picked and sauteed by yours truly! A quick dig in the leaves around the base of some fronds revealed these sprouts pictured here, almost ready to spring forth. 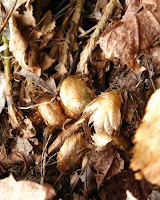 I would imagine that they will be up and ready for harvest next weekend. Stay tuned......
Posted by Neil at 7:08 PM

awesome topic - I'd love to learn some new varieties; please keep it up!